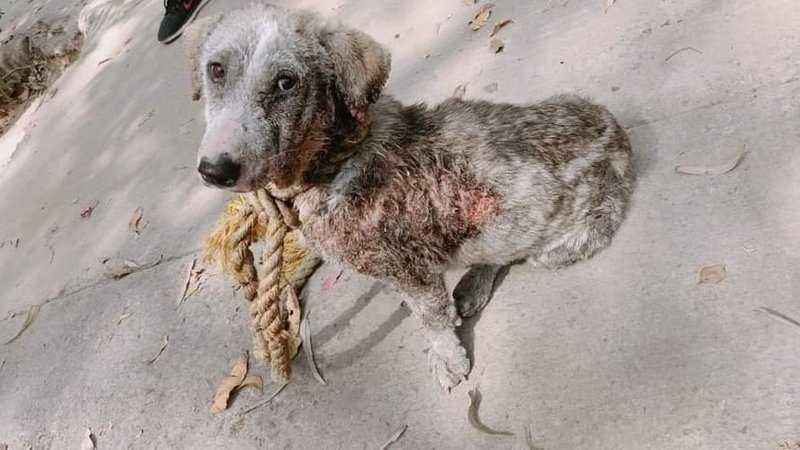 A friendly dog was brutally murdered by dog haters in Jalandhar, Punjab. They first cut his limbs and then killed him. There is a lot of anger among the dog lovers of the colony. They are shocked by the inhuman and ghastly act committed by their neighbour. Many children of that area played with the dog and many people fed  the dog chappatis.

A resident of Preet Vihar threatened a caregiver Karamjeet with dire consequences if he is seen again feeding the dogs. The favourite excuse of these dog haters is that the dogs bite them because the feeders feed the dogs. Now how ridiculous is this? How can the animal feeder instigate a dog to bite a dog hater?????

These foolish and ignorant people need some basic education regarding dogs. It is their hostile behaviour towards dogs which invite the dogs to bite them and their children. Rather feeding dogs makes the dog friendly and calmer. Infact the dog hater opposing the caregiver from feeding should start feeding himself if he doesn't  want Karamjeet to feed the dogs of his area. These dog haters are shameless people who don't realize that a caregiver invests his precious time and money to feed these voiceless souls and on top it hears all this rubbish from the dog haters.

This is a sad story of Poodle and his caregiver Vikas. Poodle was a short, cute and a shy dog who was a loner and was afraid of other dogs. Vikas used to specially take Poodle away from other dogs and fed him in isolation at a particular location. Sometimes when Poodle was hurt or sick he was given on the spot treatment. This is very common for weak dogs as they are often attacked by bully dogs of the area.

But then Vikas stopped feeding Poodle as he was short of resources. People just don't realise that caregivers spend money from their own pockets and sometimes it becomes financially impossible for them to feed so many mouths. So they are forced to restrict their feeding to smaller numbers. The same thing happened with Vikas. He had to stop feeding Poodle. Last month Vikas was shocked to see Poodle in a very bad state (pic in the post). He seemed to be having fungal infection and injuries all over his body. He was bleeding for the last 15 days and no one bothered to give him any treatment. Rather people had put a tight rope around his neck may be for relocation and needless to say Poodle must have been hungry too. Both the people and the dogs of the area must have scared him and tortured him.

When Vikas saw Poodle in such a horrible condition he took him to the hospital but then it was too late. Poodle left us all. Vikas is blaming himself for the sad demise and misery of his four legged friend who used to run and greet his human friend whenever he came to feed him. To read the honest confession and the guilt which is eating up Vikas kindly go on the link below:

Vikas is holding himself responsible for the death of Poodle. But is he guilty? Not at all. Poodle died because of the intolerant and apathetic people who had put rope around his neck to relocate him. The people who neither fed themselves nor allowed others to feed him. It is they who are responsible for Poodles death and not Vikas. 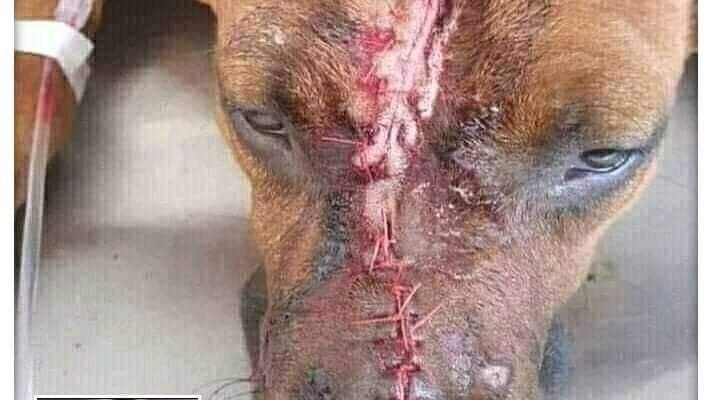 While our honourable members of parliament are pleading for stricter penalties and amendment in animal laws, the cruelty against the man's best friend is just not coming to a hault. Every day we watch a new form of cruelty towards dogs. This time a dog has been buried alive under the ground by few individuals and then one of them ran a motor bike over his head and crushed him. One needs to have a strong heart to watch this tragic video. No soul on this earth deserves such a cruelty.

The exact whereabouts of the place of crime and the criminals is not yet known. But it is being told that this tragic incident has taken place somewhere in the state of Gujarat.

A dog has been attacked by a sharp weapon  on his face (pic in the post). One can see the stitches all across his face. Just imagine the kind of pain the dog must have undergone.

Three puppies were found dead on a road in Nehru Place, Delhi. The caregiver thinks it's a murder and not an accident.

Another dog raped in Mumbai. To know more about the rapist and his cruelty kindly go on the link below:

A caregiver was harassed by her own neighbours in Sonipat, Haryana. She called the police but it didn't come to help her. She is being harassed and tortured just because she feeds dogs. Kindly go on the following link to read her tweet:

An RWA of Ashok Vihar, Delhi have been harassing a female caregiver. They have come out with a manifesto which says "Removal of unclaimed dogs from the block".  Nothing can be more disgusting and shameful than this. Wonder when will these so called educated  Indians follow dog rules. Don't they know that removing dogs from their present location is an offence? That the only way to control their population is by implementing the ABC program?. If this is the condition of the capital of India then  one can well imagine what it must be like for other parts of the country. To read the manifesto kindly go on the link below:

India does not only need amendment in animal laws. It also needs implementation of these laws. Weak laws and poor implementation of laws has created havoc on the voiceless of India. Both need to be strengthened.