A country which gave birth to Buddha, Mahavir, Gandhi, Vivekananda, Sai Baba etc who all just preached love, peace AND animal rights today cares nothing about animal rights. How far have we fallen? I directly blame our politicians for this and this current govt more. Why? Because bad people will always exist in every society, to make an example of them is the job of the law (police, judiciary etc) who are governed by the politicians.

The laws at the moment are so weak and in favour of the criminals, it's disgraceful and the politicians have no will to change it. It's time we show the world what really the condition of our law and order is and what animals in India go through every day. How disgusting Indians have become, full of apathy and no fear of the police because police don't care to take action against culprits who break the law.

Below, I am just showing a few cases in the last few days which have been reported.. Imagine what happens countrywide every day with an apathetic police force and society that goes unreported. India today stands at a precipice of becoming a shameless lawless third world country or rising to be better. Which will it be?

Dogs of Delhi being relocated for Independence Day celebration 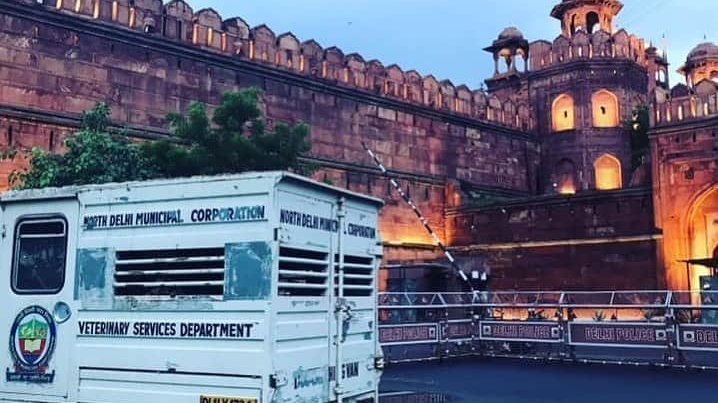 15th August 2020 is the day when India got its freedom from British rule. The day is celebrated every year with a lot of fanfare. The Prime Minister of India hoists the national flag and addresses the nation from the Red Fort in old Delhi.

This is the 73rd Independence day and our honourable Prime Minister Narendra Modi will be hoisting the flag and addressing the nation from the historic Fort which is now a heritage site.

While preparations have begun for the celebration, a piece of news has shocked the caregivers of Delhi. A message has gone viral which says that the dogs including sterilised dogs living in and around Red Fort area will be picked up and kept In a shelter till the Independence day celebration gets over and thereafter will be dropped back to their location.

This is the message which has gone viral:

"*ALERT* Caregivers and feeders in Chandni Chowk, Red Fort, Kashmere Gate. Neutered dogs will be picked up to keep them away from the Independence Day Parade. We are convinced many dogs to get relocated every year during this exercise.
Please keep an eye on the dogs you feed.
Take photos of the van so you can trace where they are going.
Visit them as much as possible. Ensure they return safely, by following up with the centre they are lodged in."

Let's see what the message is saying point by point

1 Neutered dogs will be picked up due to independence day parade.

The dog rule,2001 clearly says no sterilised dog should be picked up then why is the govt doing it? Today it's independence day tomorrow it will be Republic day and day after tomorrow some other day....

Are they being picked up because dogs roaming in the open ground looks bad and demeaning? Are we Indians ashamed of our stray dogs?

2 Many dogs get relocated every year due to this exercise

Well picking up dogs and then putting them back sounds good on paper but the practicality of it is far from good. It is the most painful experience for a dog. Being picked up by a loop is not only traumatic but physically quite painful for the dog. And then they are hardly tagged properly. So the end result is that the dogs get relocated. Dropped back at the wrong location. And then their misery starts. Homeless, hungry, thirsty and often attacked by dogs of that area. They eventually die of starvation, diseases, accidents or maggot wounds due to dog bites and attacks.

3 Keep an eye on the dogs you feed. Take the pic of the van which picks them up so that you can trace them.

In the past, many dogs who were picked up got relocated and did not get back home hence the caregivers need to be vigilant and keep a track of where they are going so that they can be dropped back safely. Imagine the kind of torture the caregiver is going through?

4 Visit the dog to the centre where they have been kept.

There is still more than 20 days to go for independence day celebration and if a healthy dog is kept in a shelter for no reason then it's quite shameful. The govt is unnecessary spending money on its food and lodging which is a waste of money.  On top of this the shelters are not a good place for healthy animals. The chances of them being infected with diseases gets quite high. What if the dog falls sick after being dropped back? Will the govt bear it's medical expenses?  Also it is needless to say that the dog gets into deep depression. They miss their home. Therefore it becomes very important for caregivers to visit their furry friends to console them like we do our near and dear ones when they are in a hospital.

It is not only the dogs and the caregivers who suffer. It is also the NGOs working for animal welfare who suffer.

Vice President of Freindicoes Geeta Seshmani has said that the practice of dogs being picked up for Independence day is quite traumatic for them too. The dogs often get relocated and dislocated as many times they are not tagged properly. The location from where they are picked is not properly tagged hence the whole exercise of picking them and dropping them back is a big mess.

In January 2020 in Jind in the state of Haryana four dogs were in a very cruel fashion picked up by the corporation workers and dumped in a 6 feet deep enclosure. This was done as a part of the preparation for the Republic Day celebration. Apparently the Chief Minister of the state was to visit the place to celebrate the Republic day. For details of the incident and to watch the trauma of the dogs kindly go on the link below:

In February 2020 when the President of America Donald Trump was visiting Ahmedabad in India the stray dogs were picked up. They were to be dropped back once his visit was over. God knows what exactly happened to the dogs, but this is the most unethical and cruel practice being done by the corporations in India. To read about this incident in detail kindly go on the link below:

It's quite clear from these three incidents how casually the corporation and the Govt is taking dog rules 2001. Relocation of dogs is an offence but the govt is doing it and they are doing it again and again and again........

Our forefathers fought with the mighty British Empire to get back our freedom. We will be celebrating our freedom on the 15th August but what about the freedom of the man's best friend?

Why should an animal be put in a cage for the celebration of our freedom?

It was India which got free from the British rule on 15th August 1947. And India comprises of both people and it's flora and fauna.

But unfortunately, we Indians have become too selfish and greedy. For our convenience and comfort, we just don't mind sacrificing the freedom of the man's best friend even if it means violating rules and depriving him of his natural surroundings which the Indian law has given him.

Let's hope our Honourable Prime Minister intervenes and stops this most unethical and illegal practice which has been going on in the name of Independence day celebrations for the past many years.

The beating heart of an ox stopped by...