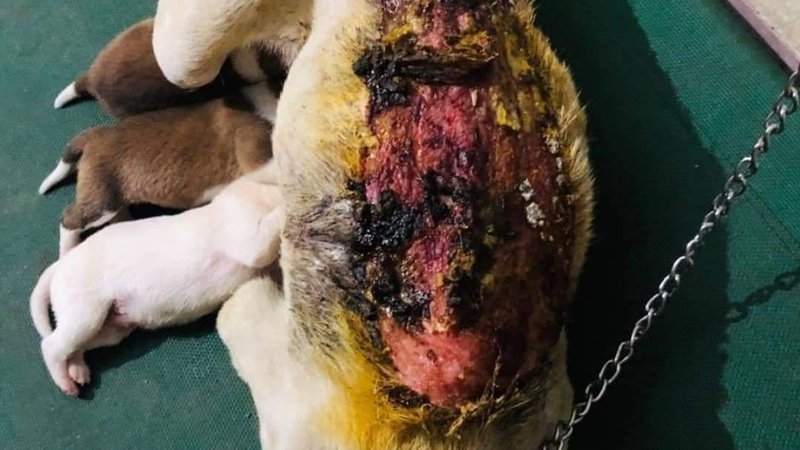 A jeweller from Assam has poured acid on a mother dog while she was feeding her pups. The mother is out of danger although badly burnt (see the pic in the post). The culprit is a murderer who was out on bail. He has again been arrested. This incident is a proof that people with criminal minds indulge in animal cruelty. This man must have definitely tortured and killed many street animals before he killed a human being. To read about the incident kindly go on the link below:

Justice for Kaamo: RWA of Sonipat kills Kaamo and throws the other dogs out of the society

On 26th December 2020 a dog named Kaamo was mercilessly beaten to death by a mob which was driven by the RWA of Kundli, TDI city, Sonipat in Haryana. The RWA claimed that the dog was rabid as it had bitten quite a few people and so they had to beat the dog to death. They didn't only stop to that. The human monsters threw out all the other dogs residing in the society with the help of the security guards.  For the video and all the WhatsApp messages between the the residents and the RWA members kindly go on the following link:

Killing a dog is a punishable offence and so is relocation of dogs. Hence the RWA and the other residents who indulged in these two acts should be punished.

The caregivers of the society are absolutely heartbroken and want justice for their beloved dog Kaamo who was ruthlessly killed by these human monsters.

This is what Muskan a caregiver has to say about the unfortunate incident:

"It's been 3 years I have been living here. I used to feed plenty of dogs and kaamo was one of them she was the sweetest dog I have mat but yesterday she was killed by the people who brutally harmed dogs. They created a story and manipulated for saving their own. they planned to kill her by spreading false statement that she got infected by rabies. They beat her Ruthlessly by throwing stones and wooden clubs. I saw her drinking water there were no symptoms of rabies. She completely fine. She was Just irritated because her jaw was injected. I want justice for my bacha"

Anushikha another caregiver of the society said the following:

"These people are accustomed to spreading rumours and treating dogs with cruelty. The dog had a broken jaw due to an attack by a pet dog and people ran behind her to add to her discomfort.. They neither allowed her to live nor die in peace. May her soul rest in peace and may the one's who did this never find peace.."

Subhashini another caregiver said the following:
"The dog was neither mad nor rabid as she was consuming water.. A pet dog had bitten her and she was in pain..to save the pet dog the owner spread the word that she is mad and 30 people with stick, stones and gun ran after her which led her to attack in defence..She was brutally murdered outside the compound.. I am a resident who has been constantly harassed by this society since past 5 year.. I reiterate she was not mad"

The statements of these three caregivers, the video of killing the dog and the WhatsApp messages are enough proofs to punish the guilty. The men who killed an innocent Kaamo don't deserve to be in the comfort of their homes. They need to be in prison. That's the right place for such monsters.

Kaamo was an Indian breed dog who like any other dog had to struggle for her survival but her suffering surmounted others. She was attacked by a pet dog which broke her jaw. The injury was quite painful which made her quite restless and irritable.  But what is shocking is the behaviour of the pet owner. Instead of sympathising with Kaamo and getting her treated he spread rumours about her that she is rabid. How shameful and disgusting of this shameless man. It is such pet owners who later beat and abandon their pets for their own petty interests.

Pet owners indulging in any form of animal cruelty should be more severely punished than a non-owners.

Imagine a dog who was already in pain due to the broken jaw was harassed and tortured by humans for no fault of hers and then very mercilessly killed in broad daylight after being declared rabid.

Kaamo's killers deserve to go in prison. That's the right place for them. Such evil souls deserve no mercy