Dogs & Pigs to be thrown out of urban areas in UP; Pups killed in Pune; Dog killed in West Bengal 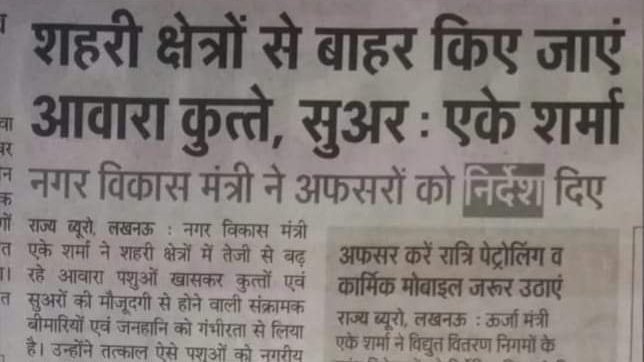 The Urban Development Minister of Uttar Pradesh has ordered the removal of stray dogs and pigs from cities and towns of Uttar Pradesh (Pic in the post). He said that this step is being taken to stop the population of stray dogs which is growing day by day and to stop the spread of diseases due to these animals. Also, he mentioned that a child was attacked by a pack of dogs which led to her death. Hence, to counter these problems and to have zero tolerance to such incidents the dogs and pigs be removed.

Well, what happened to the small child is indeed very unfortunate and shameful. This should not have happened. But who is responsible for the child's death? Is it the dogs or is it their uncontrolled population, their hunger and their hostile attitude towards humans for which we humans are responsible?

Dog is considered the man's best friend but in India, the Indian dog who unfortunately is mostly a stray is looked with contempt and hatred. He is feared and the parents often tell their children not to go close to him because he will bite. And if God forbid he bites then people declare him rabid and beat him to death.

Amongst the masses of India, there is hardly any knowledge of dog behaviour and canine rabies.

The honourable Supreme Court of India has already made ABC (Animal birth control) program mandatory for stray dogs in India. Then why isn't the ABC program being implemented in every city and town of India? Why are our leaders waiting for the dog population to grow and for such unfortunate incidents to happen?

If the ABC program was implemented in a systematic manner and with people's participation then all these problems would not have resulted. If every stray dog was treated with love and care and was made to play with children then the tragic accident which took place in Uttar Pradesh could have been easily avoided.

How will throwing the stray dogs and pigs out of the urban areas of Uttar Pradesh solve the problem?

1 Will it change the hostile mindset which people have towards Indian stray dogs?

2 will the dogs be thrown in the forests and village areas? Then how will their population be controlled? They will anyway multiply outside the cities and towns of Uttar Pradesh and will again make their way in the cities or they may die due to hunger and thirst.

What about the ABC program? Shouldn't the govt open up ABC units in each district and ask the municipality to sterilize and vaccinate stray dogs with the help of dog feeders and caregivers in their area?

Why can't our state govts create awareness about the Indian dog and its behaviour?  Our leaders should stop finding short term solutions and instead find solutions that are sustainable and beneficial for both the animals and humans.

A dog was tied to a bike and dragged in the most brutal fashion in Ajmer, Uttar Pradesh. This is the kind of mindset people have towards Indian stray dogs. Will the urban development minister of Uttar Pradesh find solutions to these problems? It's the wicked mindset that needs to be addressed. Throwing dogs away will not change anything. It is our attitude towards them that needs to be changed.

A dog was beaten to death in West Bengal

A lady in Pune killed small puppies just because her daughter got a scratch from a stray dog. So now this lady is taking revenge by killing all innocent puppies.

A pup was badly beaten up in Pune, Maharashtra

A stray dog who was sterilized was dropped at a wrong place in Old Rajinder Nagar by the municipal corporation of Delhi van. The reporter has spread the word around so that the dog is identified and taken back to her original location. It may be just one wrong drop for the municipal corporation but they have no idea that  their irresponsible behaviour has risked its life. The dog will be hounded and attacked by other dogs and eventually the dog will die of hunger, thirst and wounds.

Delhi Municipal Corporation should have been the role model for the rest of the country but.......

The plight of stray dogs in India is not because of common man of India. It's because of lack of political will to find long term and sustainable solutions for them

ABC program is the only ethical, legal, humane and sustainable solution for stray dogs but it's a pity our leaders lack the will and vision to implement it........