Brownie, an Indian dog who's been staying at Friendicoes as their free-roaming kid, is missing since the evening of 24th July 2020.
A passer-by says he seemed in distress after Friendicoes had shut for the day and some kind soul picked him up around 7.30 pm same day, some distance from the shelter below Jangpura flyover, unaware of the fact that he was already under medical care for his unique condition.

Brownie has chronic medical problems that he developed due to a severe accident he met while he was a pup. Only people familiar with that medical history can ensure he gets required treatment. For that, he needs to be found and brought back ASAP else his problems will aggravate risking his life.

If you are aware of or know anyone who you think might have rescued Brownie and can give any leads / or sight him, please inform/Whatsapp Javed at 9810002976 immediately.

Brownie is not wearing any collar currently, limps from one hind leg, and has a tiny mark on tail where fur was cut recently to treat an infection.

Are RWAs and Municipal Corporations the main villains behind Man-dog conflict? 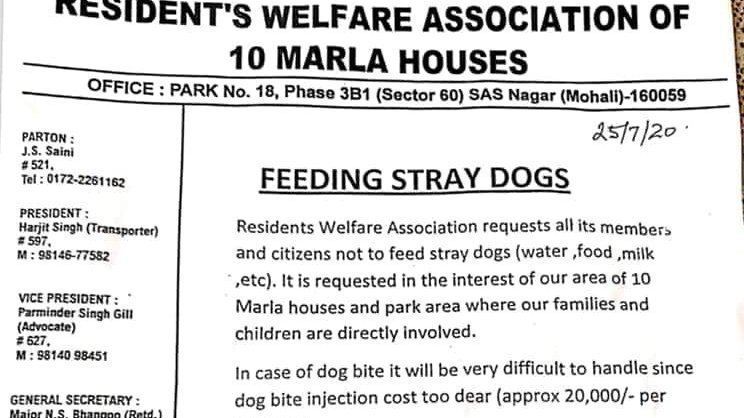 An RWA in Mohali, Punjab has come out with a circular (pic in the post) which says that they request the feeders and citizens of the area not to feed the stray dogs neither food nor water both in the colony as well as the park. Now how inhuman is that? This is grave violation of the animal welfare laws. They are directly implying that let the dogs die of starvation and thirst.

They are doing this because they fear for their families and children. What if the dogs bite them? The circular further says that if a dog will bite then they will have to give the victim  injections which costs around Rs. 20,000 per injection. Kindly go on the following link to read about it:

Is the fear of the RWA and its members baseless? If one injection of a dog bite is costing Rs 20,000 then it's definitely too much. Incidents of dog bites may have happened in the past in that area and people may have visited hospitals to get injections as a prevention from rabies which is almost 100 percent fatal. And they have paid Rs. 20,000 and more from their pockets.

Well, this kind of a situation could have been easily avoided if only the municipal corporations had created the right kind of awareness about dog behaviour and rabies. There are a lot of myths attached with canine rabies and the biggest two are:

1 All dog bites lead to rabies

2 All dogs in India are rabid

So once a dog bites just rush to the hospital and get the injections.

This is  all rubbish and utter nonsense.

The fact is that canine rabies is 100 percent preventable if the dog is given rabies vaccination. And this vaccination merely costs around 100 to 200 rupees and many animal welfare NGOs do it for free. Even govt veterinary hospitals do it for free provided people are ready to take their canines to the hospital but sadly this vital piece of information has not been told to the common man of India. They just do not know that all they need is to get their furry friend vaccinated at regular intervals. In India it is once a year. But in many other countries it is once in three years.

The Dog rules 2001 clearly mentioned about getting the dogs sterilised along with giving the dogs rabies vaccination. So that the dogs are protected from rabies and they never get affected by this deadly disease.

What people don't know is that there is a lot of difference between a healthy dog and a rabid dog. A healthy dog will never bite without any reason. And a bite of a healthy dog does not require any rabies injection. May be just a tetanus injection and an antiseptic cream.

But instead of focusing attention on dog vaccination the corporations in India are busy focusing on human vaccination after dog bite. Why are they doing it? We have seen that in Delhi too where the East Delhi Municipal Corporation has been putting obnoxious rabies poster successively for the last three years. This has not helped curb the dog population which is only multiplying rather it has created fear in the minds of the people against them. They hate them.and fear them. The incidence of man- dog and Man - man conflict has only increased over the years in Delhi. And of course the dog bite cases and the demand for rabies injections for prevention of rabies to humans due to dog bites has only incresed. If an injection in Mohali is costing Rs. 20,000 per injection then there is something fishy about this whole thing. Is there a nexus between stakeholders who are making money out of the trauma of humans who become the victims of dog bites? By misleading people and creating hatred and fear amongst them for dogs who is exactly gaining? Definitely neither the dog nor the dog bite victim of India. Then why is the corporation again and again focusing only on dog bites and rabies injection for humans post dog bites?

Between the dogs and the common man it is the animal welfare NGOs which have been sandwiched. They are responsible for getting the dogs neutered and spayed but seldom they receive the appreciation they deserve. The faulty policies and the loopholes in the ABC programme have only made their life miserable. We have witnessed that recently when Ayesha Christina of Neighbourhood woofs was manhandled in North Delhi.

Due to covid 19  pandemic the corporations had shut down sterilisation drive in Delhi. It's been almost 4 months now and in these four months the unsterilised dogs have not stopped reproducing.  The corporation will never understand this because for them dogs are just a number whom they are busy sterilising for the last 20 years and they have still not achieved a controlled population of stray in Delhi. In fact there is a news that because of shut down of sterilisation drive the number of dogs  in South Delhi have increased.

Unlike the corporations the NGOs never turned a blind eye to the suffering of both the dogs and their caregivers. They continued with the sterilization drive for those caregivers who could get their furry friends to them and of course they charged a minimal amount for that. Which is definitely not a crime especially when their payments for the ABC programme are delayed by the corporations for several months.

The  RWAs of India should stop passing unlawful circulars and should rather do the following:

1  Respect animal laws  and have compassion for the man's best friend. Vaccinate their area dogs with rabies vaccination (Rs 100 to 200) every year then even if the dogs will bite or scratch  there is no need to panic or to spend 20,000 per injection on humans. As their dog is not rabid.  And of course they should find out the cause of biting. In 99 percent cases dogs bite out of provocation.

2 An Indian female dog can reproduce 6 to 10 pups twice in a year so every day is precious. They should not lose months and days in just fighting and cribbing. They should come forward and start the steriization drive in their area and they cannot do it without the help of their caregivers so they should not stop them from feeding dogs.

What is happening today in India is all man made. Its the result of faulty policies and poor governance.