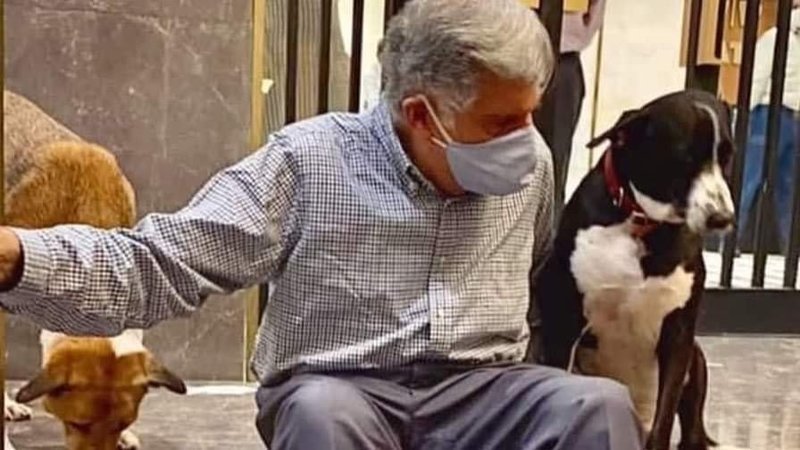 Tata group chairman emeritus Ratan Tata is not only a successful entrepreneur but also a good human being. A man with a heart of gold.

He is regarded as one of the best employers to work with by many due to his considerate and magnanimous nature.

Ratan Tata's consideration and magnanimity are not only confined to humans but also to animals. His love and devotion for the man's best friend is something which every dog lover is proud of. Especially we Indians because there are very few celebrities and leaders in India who dare to come out in public and display their love and affection for these voiceless souls.

Showering affection and love to stray dogs is considered a trait of madness by many in India. Hence, most of the celebrities and political leaders hesitate to openly display their affection for the stray.

On the day of Diwali, Ratan Tata spent quality time with his furry friends including his favourite office dog Goa (pic in the post).

Ban crackers on Diwali; Amend laws & punish those who inflict pain on the voiceless using crackers

This Diwali many dogs have lost their way. They are homeless, hungry, chased, barked, attacked and bitten by dogs of other territory. The territory which doesn't belong to them. It's quite chilly in Delhi now so in this cold weather these victims of Diwali celebration are roaming scared and terrified.

Diwali is such a beautiful festival of lights. One is suppose to clean their house and decorate them. Light lamps and distribute sweets to each other. But we humans have converted such a wonderful festival into an evil one. The bursting of fire crackers has now become a norm and this dirty thing not only creates air and noise pollution but also makes so many dogs homeless. The loud sound of crackers terrifies the dog and he runs for his life.