A 3 month old pup thrown from the roof top in Delhi. The pup dies on the spot 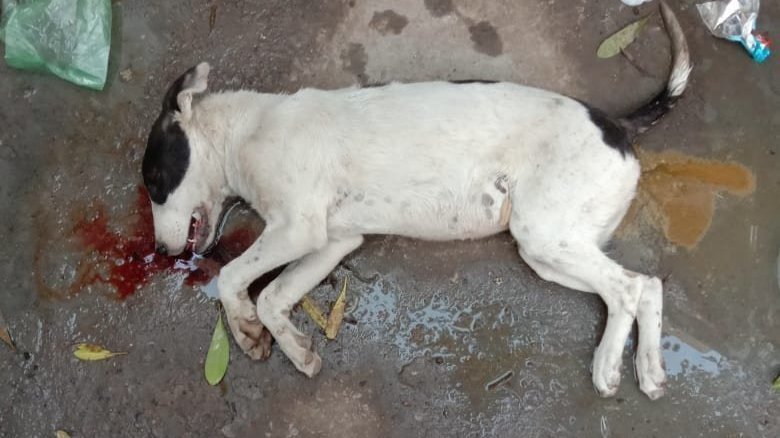 A pup died on the spot (pic in the post) when he was very mercilessly thrown from a rooftop in Delhi. There are few families who hate dogs and this is the way they are getting rid of dogs. By throwing them from the rooftop. The following message got viral on various animal WhatsApp groups on 19th December 2020:

The reporter (M- +91 85xxxxxx) had forwarded the following message:

There are 2-3 families who took a 3-month-old baby to the roof and threw it down, causing the puppy to die on the spot.
They kill the band's dog
There is a local who feeds and fights dogs.
He threatens to kill all his dogs,
There should be action
So that they do not go wrong with the dog and fight with the feeder.
Please help this puppy and get justice the dogs here"

The feeder who feeds the dogs is helpless and is living in constant fear. The families who killed the pup are threatening to kill all the other dogs.

This is nothing new in Delhi. Every day a dog is killed, poisoned and tortured and the people who do it feel no remorse or guilt. They are neither aware of the legal offence they have committed nor they are aware of the ABC program. ABC program is like greek and Latin to the majority in India.

The unfortunate pup should not have been born on the streets of Delhi in the very first place. Why wasn't his mother sterilized before his birth? The pup and his mother had a caregiver then why couldn't the caregiver get the dogs he feeds sterilized? Was he unaware about the ABC program or he didn't know where to get the dogs sterilized?

Why should Delhi municipal corporation be running ABC program when Delhi people themselves are busy controlling the stray dog population by killing them?????

Why run a parallel method of stray dog population control when the dogs are anyway being killed by the people of India that too on a daily basis?

Do the people who kill dogs even know that killing a dog is a punishable offence and there is a program called ABC which is the only legal way to control the stray dog population in India????